I love taking pictures but I'm a picture-printing-procrastinator. I've bought several Groupons for photo books -- they've expired. I have picture frames on display in our house -- they're filled with models and their model children.

I am allergic to printing pictures.

If it weren't for my mom begging me to print her some pictures of the boys I probably would have left all these frames blank for at least a year or two... or until we moved, at which point I would've convinced myself it was a smart idea to leave them empty because it helps when the potential buyer can envision their own family in the house. Just bein' smart. 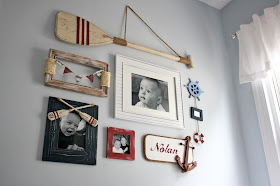 Last summer I started collecting nautical-themed items for N's room. The first was this Welcome sign that I re-painted using this technique. I decided not to distress it because several other pieces for the wall were distressed and I wanted it to be a mix of clean and weathered. 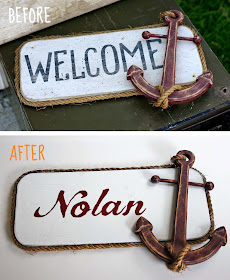 I found this piece of artwork (along with 2 others) at a garage sale. I already had so many anchors/oars/etc. so I yanked the rope and life preserver off and just painted it red and did some light distressing. 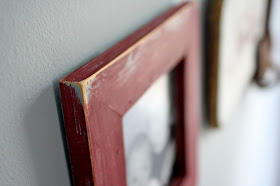 This frame was a fun re-do. I lost the before picture but it was just an ugly old brown frame. I white-washed it using basic $1 craft paint then wrapped the sides in rope. I used a strand of the rope and some misc. fabric to make the pennants (or bunting, or flags, or whatever these are called!) 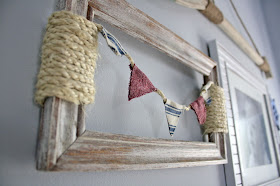 Although I wish I could say the oar was an amazing garage sale find, sadly, it was not. Although, it was a pretty great Home Goods find considering it was the only one they had and it was buried under a bunch of broken junk in the clearance aisle. Certainly not placed there by accident. I am all too familiar with that move. Nice try fellow oar-wanter, but you can't hide stuff from me!

The oar was $14.99 and originally had turquoise stripes, but I repainted them red. 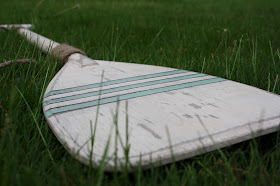 This large white frame (with this cute chubby-cheek babes) was a brown wooden frame that I just painted white. 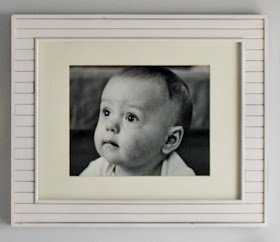 And that chincy wheel-frame-presever chain thing is just what it looks like. I needed something for the right side that was tall and skinny and this was all I could come up with. Boo. Need to find a replacement for it.

So a quick step-by-step for a gallery wall:

Step 1: Lay out your design on the floor. 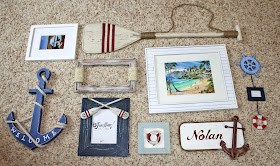 Step 2: Measure the layout and determine if it will fit  in the space on your wall.

Step 3: If layout won't work, re-arrange. I ended up removing the white frame and anchor from the left side and ended up with this: 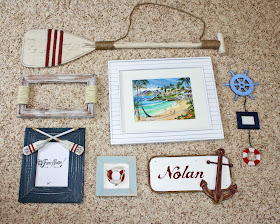 Step 4: Trace all your pieces on newspaper (*see tip below about this), cut out the shapes, and arrange on your wall. This idea courtesy of Before Meets After (found on Pinterest). 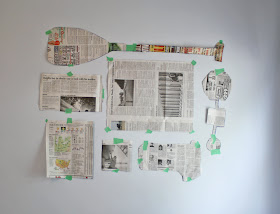 I ended up having to move the group down three times! I still think it's a little too high, but whatev. An important *tip* I learned here would be to use magazine paper INSTEAD of newspaper. Smudges galore: 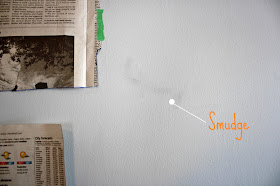 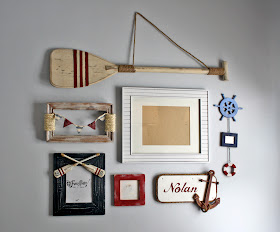 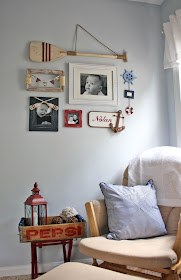 Pretty happy with the results. I think one more oar along the bottom, flipped the opposite way would make it perfect (oh, and finding a replacement for the chain-o-nautical-stuff). I'll need to head back to Home Goods and see if the oar-wanter has any new hiding places.

Linking up to {My 1929 Charmer, Sisters of the Wildwest, Debbiedoos, Nifty Thrifty Things, Coastal Charm}